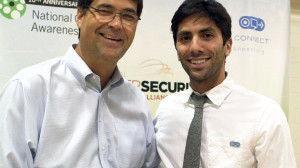 Having also been “Catfished” by what turned out to be a Michigan Mom posing as a much younger online romance,  the continual lies, fake Facebook pages and deceptive months of exchanges made for an acclaimed 2010 documentary film about his experiences titled – you guessed it “Catfish“.   The film’s success spawned the hit reality series “Catfish The TV Show” now in its 3rd season on MTV.  Nev is the first of a new generation to take the reins of a web gone wild!  In the show he created and stars in, his team pulls back the blindfolds of those who get cyber duped.  Stories of some who even drive hundreds of miles only to learn the real relationship story with the help of Nev. 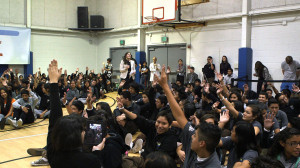 In a recent event for the National Cyber Safety Alliance, Nev joined a team assembled by the NCSA and McAfee to talk straight about staying safe online in a gym filled with “twitter-pated” High School teens at Gertz-Ressler High School.  Look for links soon to this shoot where RheaCom captured it all “film style” with two cameras in a noisy, dimly lit gym off the 10 and 110 freeways in Los Angeles.

Special thanks to Emily Eckland, Director of Digital Strategy & Awareness Campaigns and Michael Kaiser, Director at NCSA and Tracy Ross, Director of Public Relations and Online Safety for Kids Program at McAfee.  We also had the privilege of working with Michelle Dennedy, McAfee Chief Privacy Officer and a national leader in cyber safety legislation.   Thanks to all for hooking us up with “Catfish”.

The National Security Alliance will be staging a special cyber security event in Los Angeles at a selected area High School with MTV’s “Catfish” Nev Schulman.  Working with Corporate sponsor McAfee, RheaCom will capture onsite video of this event on Wednesday, October 16th followed by interviews with Nev and the students who watched the presentation.  Production responsibilities included coordination of local crew, equipment and post production video editing.  Please send your questions about online security or the hit MTV show and we’ll get his reactions.